Getting Started With Docker (Part 1)

Unless you’re brand new to the world of software or you’ve been living under a rock, you’ll have heard of Docker and the concept of “containerisation”. But what is Docker and why is it such a big deal?

By the end of this article you should:

At its most simple level, Docker is a tool that allows you to run applications in a replicable, isolated environment. Using Docker, an application will always run in the same environment, so there won’t be inconsistencies or issues when the application runs on different computers or servers.

It also makes it really easy to run other people’s applications. You can simply pull a Docker image and spin up the application with one command. Everything that the application depends on will automatically be configured for you.

A Docker image is a template that can be used to build an environment. It’s essentially a snapshot of what the environment consists of and the commands that need to be run in order to configure it. An image will include the operating system and the application code bundled together in a format that can easily be shared.

You can create Docker images using a Dockerfile. A Dockerfile is a text document that defines all of the tasks that need to be carried out in order to build the image. These could be things like installing an OS, copying source code, installing dependencies etc.

Once you have defined a Dockerfile, you can build it and you’ll have a Docker image.

A Docker image becomes a container at runtime. It is the running instance of an image. A container will run the same on any system that has the Docker engine installed, because the image it is based on has configured everything it could possibly need.

Note - I’m using MacOS and a unix based terminal. If you’re using windows, some of the CLI commands used in this tutorial may not work on your system.

The first thing we need to do is install the Docker engine on your computer. The easiest way to do this is to download Docker Desktop (available on both Windows and Mac).

Once you’ve installed Docker desktop, you should have access to the Docker CLI. (Make sure Docker desktop is also running on your machine or some commands won’t work).

You can check if Docker CLI is installed by checking the version in the terminal:

Now that we have Docker installed, we’re going to create a really simple Docker container that runs a JavaScript script to print “Hello World!” using Node.js.

There are four steps to this:

To begin with, create a new directory for your application:

Then use the cd command to navigate in to your new directory:

Next, we’re going to create an index.js file. We will use the touch command which will create an empty file with the name we specify:

Next, let’s open our code editor (I use Visual Studio Code but any editor will work e.g. Sublime Text, Atom) or a CLI editor like Vim.

Open the index.js in your editor and insert the following script:

The code that we’ve written is an IIFE (pronounced “iffy”). That’s short for immediately invoked function expression. It’s a function that will get called immediately when the script is run. Without using an “iffy” we would need to explicitly declare and then call a function like this:

There’s no difference in performance between the two approaches - the IIFE is just less code to write!

Next we’re going to create a Dockerfile:

Open the Dockerfile in your editor and let’s start configuring the image.

You can see more of the official Node Docker images at the node.js page in the Docker hub.

Next we’re going to set the working directory for the upcoming commands using the WORKDIR command (docs):

We’re then going to copy our index.js file in to the work directory using the COPY command (docs). The first argument is the source path (in this case the current working directory which is represented with .). The second argumuent is the destination path on the image file system. As we’ve set the WORKDIR in the previous step to /usr/src/app, we can again use . to represent /usr/src/app.

Finally we’re going to use the ENTRYPOINT command (docs) to run the script:

Our Docker image is now ready to be built. We can build the image with the following command:

Once you’ve run the command, you may see Docker downloading the parent image if you don’t have it on your system already, but it shouldn’t take long and you’ll end up with something looking similar to this: 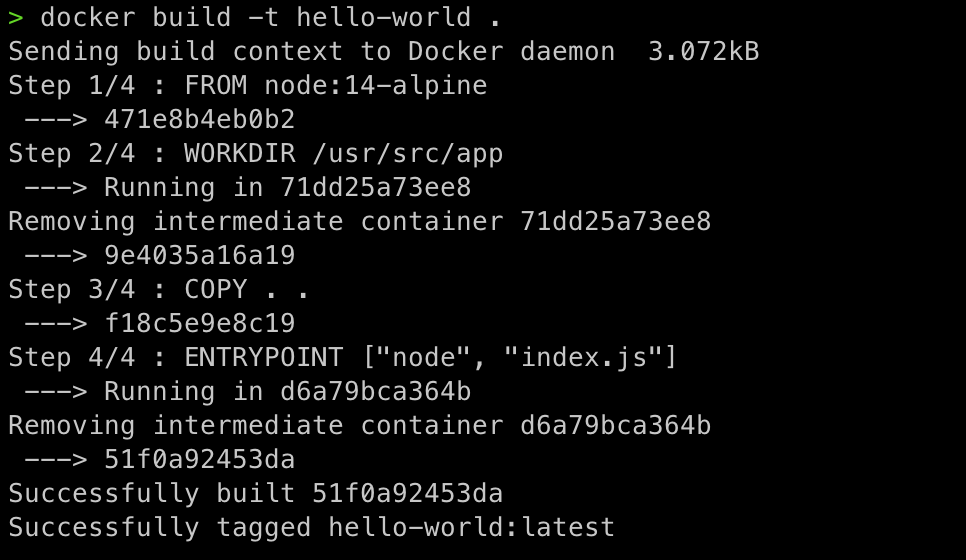 You can see a list of the Docker images you have on your system by running:

We’ve now built our Docker image and tagged it with hello-world. Running it is as simple as running the command:

You’ll see Hello World! get printed to the console and that’s it! You’ve built your first Docker image and successfully run a Docker container.

I'm a front office Software Engineer, building risk systems at UBS in London. I've been coding since 2013 and have worked in a number of startups/scaleups.Seán Barry on Twitter